Exciting routes through the unbelievable scenery of Colombia

Follow in the footsteps of Pablo Escobar, the gold legend of El Dorado, or the sugar barons and seek out coffee haciendas – there is an incredible amount to discover in Colombia. We have put together the best routes for you – there is something for everyone.

El Dorado – hiking in the legendary empire of gold

Walk where the king bathed in gold dust: El Dorado, the spectacular land of gold at the Guatavita lagoon. Legend has it that every Muisca ruler made a sacrifice to the sun god in the form of gold and emeralds on his gold raft. He himself was painted with gold dust. Take the trail to discover the legend, park the car at the national park and take a long walk through the golden region of the Muisca Indians. There are many restaurants in the town of Guatavita where you can enjoy a relaxing lunch.

Not tired of hiking yet? It is not far to Suesca, the most famous spot for climbing in Colombia. Enjoy the sunset in this stunning setting. On the way from Suesca to Villa de Leyva you will pass through the picturesque scenery of Cucunubá, Lenguazaque and Ráquira. Camp in Villa de Leyva and take a leisurely stroll through the town. From there you can either hike to the sacred lake in the Iguaque uplands (max. 3900m altitude) and take in the incredible views of the valleys below and its unique natural beauty, or you can take the car and explore the desert around Villa de Leyva, the ichthyosaurus, the old monastery Santo Ecce Homo, the Periquera waterfalls, or the ruins of the former centre of religious ceremonies “El Infierinito” (“Little Hell”).

From Villa de Leyva you can drive to Lake Tota. Explore all four kilometres of the white sandy beach and take a boat trip to the islands. You should definitely camp on or near the beach – it is a dream. Or you can drive from the town of Aquitania to the uplands and visit the lakes where the Cravo Sur River has its source. You will love the fantastic views on this golden hiking tour and its awesome combination of perspiration and inspiration.

Experience local culture and picturesque landscapes in the Cauca Valley and learn more about the cultivation of Colombian sugar and coffee. The region around Cali, the “branch office of heaven”, has always been an ideal place for sugar cane plantations. The city itself is buzzing with classic salsa clubs and is one of the oldest cities in America. After an evening experiencing the heat of the vibrant dance floor, get in the car the next morning and drive to the sugar barons and coffee haciendas. In the distance you will see the characteristic rusty tone of the landscape and the earth rich in iron and coal deposits. 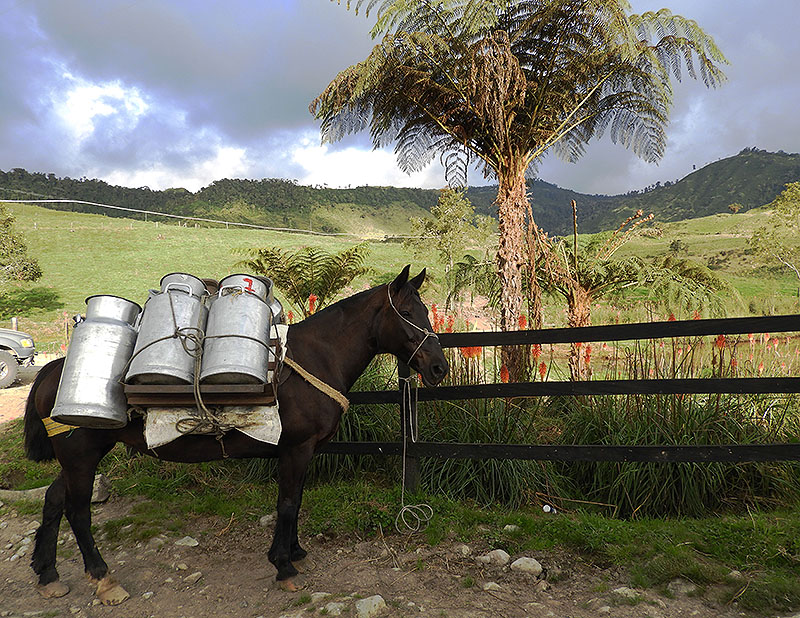 The route through the Cauca Valley will take you past sugar cane fields towards Amaime. The Sugar Museum is the place to go to find out all about the history of sugar in Colombia and how the white gold is cultivated.

From there you can reach the coffee country. The picturesque coffee haciendas are inviting places to linger. Learn everything about the coffee bean process – from the bush all the way to the roasting house.

The tourist hot spots of Salento and Medellín are on this route. Here you can hike through national parks, volcanoes, glaciers, rainforests and upland moors. The varied landscape and the coffee and sugar plantations offer the ideal combination of nature and culture.

Still not had enough of the Colombian landscape? The second part of the trip will take you over the thermal springs at the Ruiz volcano. Choose the route via the Magdalena River to Bogotá or drive south of the volcanic ridge via Toche back to Cali. Put up your tent in a volcanic crater on this route and experience a very special night in the west of Colombia.

In the valley of the Magdalena River – hiking on historic trails

Follow in the footsteps of the scientists Alexander von Humboldt and Aimé Bonpland in the west of Colombia to the Caribbean coast. The Franco-German team embarked on a research trip more than 200 years ago. Drive from Cali on to the route of the naturalists – in the opposite direction. See the many sugar cane fields in the Cauca Valley and the white city of Popayan with its colonial architecture and pretty whitewashed houses. Get back in the car and you will reach the village of Salento which is famous for growing coffee. 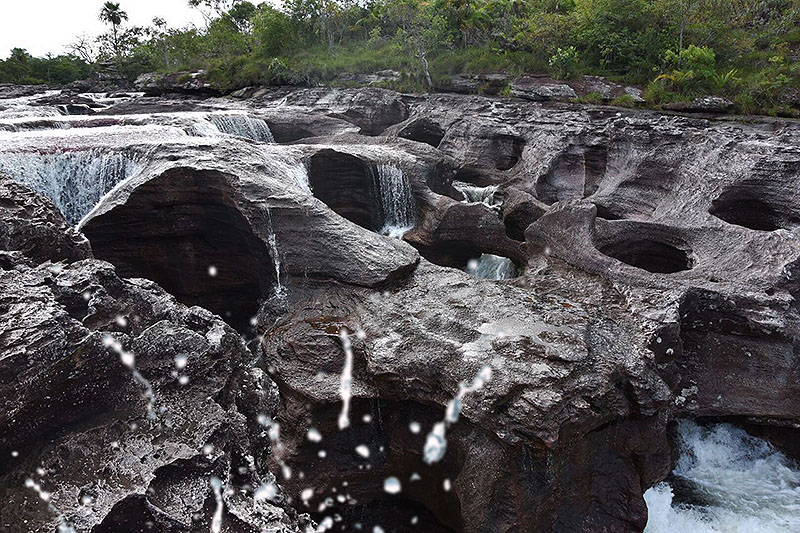 Set up your tent in the Machin volcanic crater and experience an unforgettable night in an enchanting landscape. From the crater you can get to the valley of the Magdalena River where a white marble canyon and an emerald green river await you. An ideal place for hiking! Drive from there to the location of Pablo Escobar’s notorious Hacienda Nápoles and to the charming town of Mompox (UNESCO World Heritage Site).

The tour continues on to the coast all the way to Cartagena, the largest Spanish fortress city on the American continent and once an important port for the slave trade.

Today it is worth taking a tour through the narrow alleys and past the ancient houses. Enjoy the sunset from a pavement café and check out the vibrant international party scene.

The route through the valley of the Magdalena River leads along paths steeped in history, promising captivating and breathtaking scenery, and ends in an historical and yet modern stronghold of Colombia. Ideal for anyone who wants to combine nature, history and culture.

El Libertador Simón Bolívar – on the route of the freedom fighter

Follow the paths of the national hero of the north of South America, Simón Bolívar, and embark on a journey through history. He came from central Venezuela in the 19th century with his army through the east of Colombia and arrived in Bogotá, the Colombian capital. He was victorious and ended the Spanish rule over the Viceroyalty of New Granada in 1819. This tour traces Bolívar’s route in the opposite direction to the Boyacá bridge.

It was there that the Battle of Boyacá was fought and won in a defining moment for the independence of Colombia as a nation. There is still a monument here commemorating this battle. The tour continues from this historical place deep into Boyacá where the native Indian influence is still predominant, passing thermal springs and little picturesque villages on the way in an area surrounded by a panorama of majestic mountain scenery. Set up your tent at Lake Tota for a wonderful overnight stay.

Moving on from the historical section of the route, you will now cross the Andes into the Llanos, a vast plain drained by the Orinoco river. Parts of the area are flooded during the rainy season. When you travel from Lake Tota over the Andes to the lowlands, you will pass through all the climate zones in a very short time. The trip goes from 3200m to 4000m and back to 100m. Visit private nature reserves and marvel at the unforgettable diversity of the Orinoco Delta.

This tour offers everything from ancient Indian culture and the early modern history of Colombia right through to the picturesque scenery of the Orinoco.

The south of Colombia – where cultures meet

The city of Cali has more to offer than churches, monuments and salsa clubs. It is a melting pot of Afro-Colombian, Indian and Spanish Mestizo cultures. The Feria de Cali is held in December every year. It is the largest Afro-Colombian festival of music and culture in Colombia. At other times of the year, one spectacle which is not to be missed is the Indian dance performance at the twice-weekly craft market. From July to October you can make day trips from Cali to the Pacific and watch humpback whales with their young. 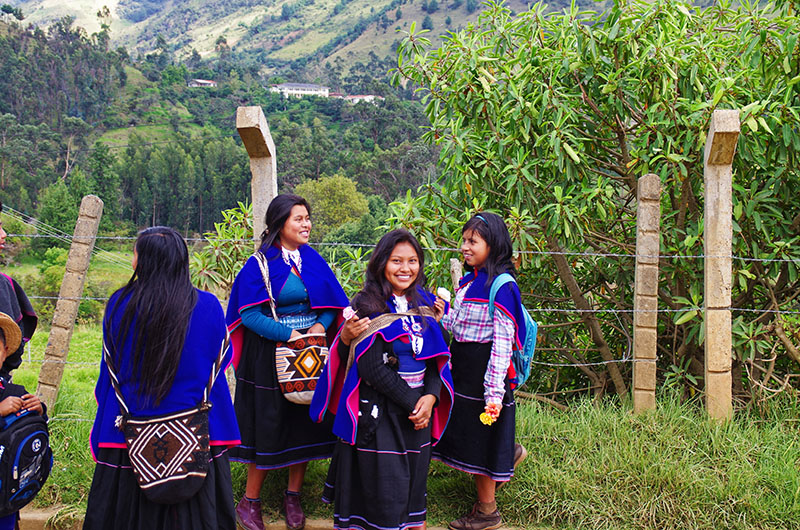 There is a longer route in a southerly direction from the city to Silvia, a typical Indian village. The people combine their traditions with technological progress. The tour takes you to the white city of Popayan all the way to Pasto, the southernmost city in Colombia. This is located on the slope of the Galeras Volcano and a short distance from La Cocha lake. You can hike through the picturesque countryside at the lake before driving on to the Sibundoy Valley where you can admire the jungle scenery and encounter authentic Indian tribes who celebrate their most important annual festival in the month of March. See the Indian handicrafts which are famous and in demand all over Colombia.

The last part of the tour will be an epic voyage. The route leads to the “Trampoline of Death”, one of the most dangerous roads in South America and gateway to the Amazon region with a difference of over 3,000 metres in altitude. This trip is incredibly beautiful and is guaranteed to be unforgettable. Walk through the rainforest or observe the diverse wildlife.

You can choose to end this tour in either Bogotá or Cali. On your way back, you can decide to explore the Tatacoa Desert or visit the archaeological sites of Saint Augustine and the Paletará highlands.

The Narcos tour – in the footsteps of Pablo Escobar

Go on a tour of discovery and learn all about one of the biggest cartel bosses of all time. This tour will take you past famous places where the drug baron lived and locations where the Narcos drama series was filmed. Delve deeper into the past of the drug trafficker and into what is arguably one of the most shocking crime stories in the world.

Visit the Congress in Bogotá and Escobar’s finca, the Hacienda Nápoles in Doradal. Naturally this route will also take you to Medellín, where the drug baron is buried, and his beloved neighbourhood of Laureles.

The tour ends in Cali where the infamous adversaries of Escobar, the Rodriguez brothers, had their empire. They outlived their arch-enemy by two years before they were captured and extradited to the USA. Experience the story at close quarters on the Narcos Tour.

Between war and peace – follow the route of the FARC conflict

Visit the places which were caught up in 50 years of conflict. There are not many societies in the world which have persisted in a fight against injustice in one country for such a long time.

What began as a protest by peasants and other people from rural areas quickly developed into a guerrilla organisation engaged in armed conflict against the government. The FARC ran drug trafficking operations in order to finance the weapons. People were also kidnapped and held to ransom. Colombia managed to end this conflict in 2016.

Follow the story of the FARC movement, stopping off at the significant places along the way. Start at the place of origin of the FARC in Huila and continue to the places in the Cauca Valley which were often the scenes of fierce combat. You will go through the coffee country and the town of Mompox and arrive in Cartagena where the 2016 peace agreement was signed with the eyes of the world looking on. This tour will give you an insight into the recent history of the country and will introduce you to the idyllic landscape typical of Colombia.

You already know what you want to see but still need a few tips?

We will advise you of the must-see sights to match your interests and skills. Write to us and we will plan your trip together!